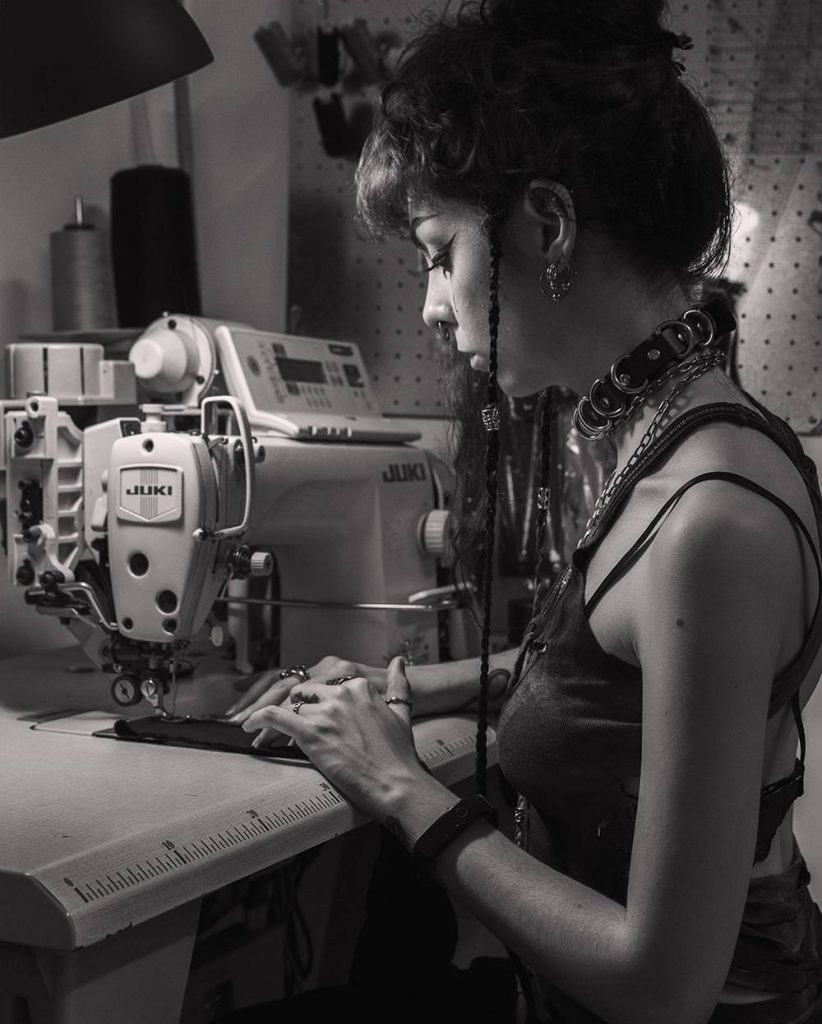 Ainhoa ​​Trice, better known as Ynhoia, is a young artist and fashion designer. Interested in the zero waste movement and in the use of sustainable techniques and materials. Started designing and making his own garments at a very young age, it was not until 2019 when she started selling their creations worldwide through their own online store.

All her clothes came to a dystopian perspective of a world that came to an end, while at the same time trying to raise awareness of not reaching that point in real life.

The clothes are completely made by her in her small studio in Barcelona. Paying close attention to the development of each pattern to optimize material use.

Each design is created with unique zero waste patterns, with deadstock fabric or natural fibers, naturally dyed with plants, fruits and vegetable shells, or using low impact dyes. She also uses recycled garments which makes his creations virtually one of a kind.

Ynhoia advocates for an unisex fitting, not giving importance to the gender of the garments. In addition, most of his creations are of unique size with different ways of being able to adjust according to the size.

The various garments can be found in different collections in limited or unique quantities and some other permanent designs throughout the year for being essential basics.

Unique method to create patterns that do not produce waste in the production of garments.

Using second-hand garments and the rule of three R; Reduce, recycle and reuse.

Low impact dyes are are less harmful than conventional dyes, need less water to dye, and last much longer on clothing.

Fabrics are sustainable made from vegetable fibers or deadstock sourced.

All the imaginary and conceptualization of Ynhoia is inspired by the human being and his actions. With a great interest in the behavior of humanity, she creates the world of Panthalassa, a world where all her creations have a place giving solutions to her characters, focusing on an artistic sustainability despite the decline that is suffered, a way of giving hope when it has been lost.

“They discovered a certain bluish mineral of great power, which generated energy, that material was unheard of and unknown to all, and it surpassed the knowledge of even the most sages. They started using it as fuel, it could be said that an industrial revolution began at all levels.

In a few years, that material was used massively to make everything work, to the point of starting to be toxic, something that no one could foresee, since technology and tools at that time were not as developed

The rains began to be acidic, the air unbreathable, the water was polluted and the land was infertile, people were dying of diseases developed in a strange way and many other new ones started, the contamination was imminent and irreparable. The human being was corrupt.

The solution was to live underground, the only place where they did not die, so some people began to believe in going back to the beginning, when all that had not yet happened and everything was pure. That group of people called themselves Undaunted. ”

We use cookies (sadly not the edible ones) to personalise content and ads, to provide social media features and to analyse our traffic. We also share information about your use of our site with our social media, advertising and analytics partners who may combine it with other information that you've provided to them or that they've collected from your use of their services. You consent to our cookies if you continue to use this website.
Cookie settingsACCEPT
Privacy & Cookies Policy

This website uses cookies to improve your experience while you navigate through the website. Out of these, the cookies that are categorized as necessary are stored on your browser as they are essential for the working of basic functionalities of the website. We also use third-party cookies that help us analyze and understand how you use this website. These cookies will be stored in your browser only with your consent. You also have the option to opt-out of these cookies. But opting out of some of these cookies may affect your browsing experience.
Necessary Always Enabled
Necessary cookies are absolutely essential for the website to function properly. This category only includes cookies that ensures basic functionalities and security features of the website. These cookies do not store any personal information.
Non-necessary
Any cookies that may not be particularly necessary for the website to function and is used specifically to collect user personal data via analytics, ads, other embedded contents are termed as non-necessary cookies. It is mandatory to procure user consent prior to running these cookies on your website.
SAVE & ACCEPT